Anemia in Elderly: Risks and Causes of Low Hemoglobin

Senior Health
Written by: Marina Peric, M.D.
Reviewed by: Mubashar Rehman, PHD
Contents hide
1 What is hemoglobin at all?
2 Symptoms of anemia
3 Why is my hemoglobin low?
4 Consequences and risks of low hemoglobin
5 Next step: Treatment
6 References
FacebookTweetPinLinkedIn

Have you noticed a red flag marking low hemoglobin levels in your last laboratory results? You might be having anemia, a low number of red blood cells, or a low hemoglobin concentration in your blood. It is a common medical issue – studies state that more than 10% of people over 65 suffer from anemia, and the prevalence goes over 20% in those older than 85.

Although frequent, anemia in the elderly is not a condition to be ignored. First, it can lead us to discover the disease which underlies the development of anemia. Second, anemia and its consequences are not harmless issues.

That’s why, we bring you this short overview of anemia development, symptoms, risks, and treatment.

What is hemoglobin at all? 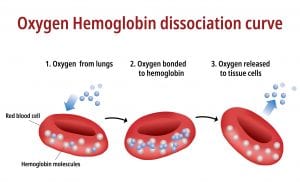 According to WHO, the concentration of hemoglobin in the blood should be over 120g/L for non-pregnant women and over 130g/L for men. If hemoglobin concentration is below these values, anemia is suspected. The severity of anemia depends on how low the hemoglobin is and the speed at which it is developed.

A low level of hemoglobin means a low blood capacity for transportation of oxygen and carbon dioxide. In that case, the tissues do not have enough oxygen for normal metabolism. This typically presents with symptoms such as pallor, weakness, fatigue, shortness of breath, high heart rate with low blood pressure.

Since most of the anemias develop gradually, the body partially adapts to the new low-oxygen conditions, so the symptoms may not be pronounced. What is particularly tricky is that the signs and symptoms of anemia are not specific, especially in the elderly. That is why, they are often overseen and attributed to advanced age, both by patients and their doctors.

Given the frequency of anemia in the elderly population and the unspecific clinical presentation, signs of it must be actively monitored. Regular checkups and blood tests are the best way to early detect and treat anemia.

Why is my hemoglobin low?

There are many potential underlying reasons for a low level of hemoglobin. Based on the development mechanism, anemias are typically classified as those related to insufficient or inadequate production of red blood cells, and those associated with an increased loss of them. Both of these groups are presented with an array of diseases that lead to anemia, as listed in the following table.

A series of tests and examinations must be conducted to discover what is the cause of anemia in a particular case. These, among others, include physical examinations, complete blood count, iron blood tests, etc. Regardless of all of that, in around 20% of elderly patients with anemia, the cause remains unknown.

Consequences and risks of low hemoglobin

Is anemia a dangerous condition? Yes, and no.

A chronic mild or moderate anemia is not a condition that will directly kill you, but its consequences are numerous and serious. Anemia can worsen the symptoms and outcomes of chronic diseases, particularly in the elderly. For example, if you have anemia, to supply tissues with oxygen, your heart will be forced to work more. If you happen to have heart disease too, and this forced work continues for some time, it may worsen and become unstable.

Anemia was also linked with many diseases and conditions which affect the daily functioning and quality of life of an elderly person. For example, elderly people with anemia were shown to have decreased mobility, increased frailty, and poor physical performance in several studies. Anemia was also linked with cognitive decline, a higher risk of developing dementia, and a higher risk of depression.

Therefore, though not a direct killer, each anemia should be taken seriously and examined in detail. Anemia in an older person often leads to diagnosing a previously non-diagnosed underlying disease.

The treatment approach depends on what is the cause of anemia in a particular case. Therefore, it is not wise to try to treat anemia on your own – even if a friend or a family member also has it, their medications and doses probably won’t work for you. The goal is to treat the cause, which cannot be achieved without proper examination and a doctor’s advice.

While specific drugs called erythropoiesis-stimulating agents exist for treating anemia in chronic kidney disease, other chronic conditions may not have specific treatment. Keeping the underlying condition under control is the only way to keep anemia under control in these cases. It is similar to the deficiency of iron, folates, and vitamin B12, although these usually require supplementation, either oral or intravenous. For elderly patients with severe anemia, blood transfusions are the most effective treatment option.

The future of anemia treatment is yet to come, and new potent drugs such as hepcidin inhibitors and HIF inhibitors are being tested. As new medications and tests develop, the treatment of anemia will hopefully become more individualized and hence more effective.

FacebookTweetPinLinkedIn
Article written by Marina Peric, M.D.
Marina is a medical doctor from Belgrade, Serbia. She graduated with high honors in 2020 and is aspiring to become a pathologist. During her studies, she took part in several scientific researches, mostly in the pharmacology niche. She was also an assisting teacher at the Department of Histology and Embryology for 5 years (2015-2020). Marina has years of experience as a writer on health-related topics. Apart from English, she fluently speaks several languages, including Spanish, Russian, and Czech.

Are Drugs Causing You Joint Pain?
May 17, 2022
The Complete Story Behind Fibromyalgia
May 12, 2022
6 Things That Might Be the Reason Behind Your Joint Pain
May 5, 2022
Your Ultimate Guide to C60 and Arthritis
April 29, 2022
How Hyaluronic Acid Can Help Those Living with Joint Pain
April 20, 2022
Manage Cookie Consent
We use cookies to optimize our website and our service.
Manage options Manage third parties Manage vendors Read more about these purposes
Preferences
{title} {title} {title}