Mental Health, Senior Health
Written by: Maki Palad, M.D.
Reviewed by: Mubashar Rehman, PHD
Contents hide
1 Dementia — and its stepwise decline
2 Activities for Severe Dementia
2.1 Make them listen to music they used to love
2.2 Go outside, visit the park or just chill by the porch
2.3 Spend time with pets
2.4 Read them their favorite book
2.5 Brush their hair, massage their hands
3 Conclusion
4 References:
FacebookTweetPinLinkedIn

Dementia — and its stepwise decline

Dementia is an umbrella term that covers different disorders and Alzheimer’s disease comprises the majority of it. It is a disorder characterized by a decline in at least one cognitive domain such as learning and memory, language, executive function, attention, perception, motor or social cognition [1]. Most seniors suffering from dementia present initially with forgetfulness and it is often a family member who first notices it. They have difficulty retaining new information, handling complex tasks such as balancing a checkbook, orientation in familiar places, or even a change in behavior. The symptoms worsen over time, but the rate at which the disorder progresses varies. Most individuals go through different stages based on their independence and functionality — early, middle, and late-stage dementia [2]. But, a clear delineation of these stages can be difficult as most people have overlapping symptoms.

Make them listen to music they used to love 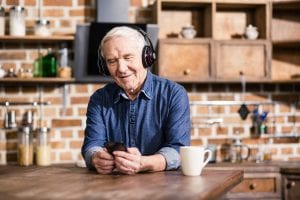 Listening to music that they like or are familiar with helps elicit a pleasurable response even to patients with late-stage dementia. One study showed that an 84-years old woman with severe cognitive impairment responded to familiar melodies by humming and singing with some words [4]. This provides encouraging support to the role of music therapy in the management of late-stage dementia.

Go outside, visit the park or just chill by the porch 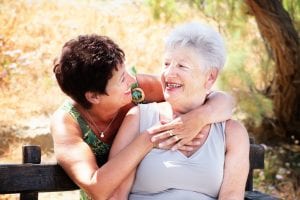 Nothing beats a beautiful day at the park surrounded by nature and just watching time pass by. It may be a good idea to take them out of the concrete walls of their homes and go out to places that they used to visit or enjoyed in the past - as long as they are comfortable and capable. If there is limited mobility or ambulation is too much for them, then, simply sitting on a bench at the park will do! 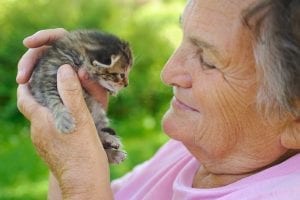 Cats and dogs have always been seen as therapeutic for most people. These furry friends of ours seem to bring joy without even trying! Spending time with them could help reduce anxiety and build a lovable relationship with seniors. They can even help groom and feed them.

Read them their favorite book 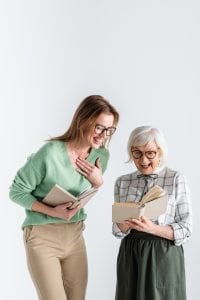 Reading them books that they used to love can also be a pleasurable activity for severe dementia. There are also sensory books perfect for seniors to fidget or fiddle with during storytelling! A fidget sensory book contains soft shapes and pages arranged in different layouts and typically made of felt. It is especially helpful in encouraging engagement and communication. It is also said to decrease agitation among seniors with dementia!

Brush their hair, massage their hands 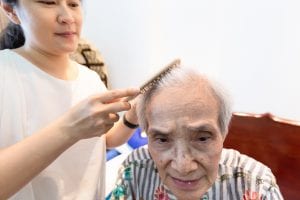 Gentle touch can provide reassurance to seniors with late-stage dementia. An expressive touch, such as brushing their hair and offering to massage their hands, conveys the message of nurture and acceptance to them especially at this stage when they are mostly dependent on others to carry out activities and personal care.

With the progression of dementia, the burden of care can be heavy as well. Seniors with late-stage dementia become less and less interactive with their environment. The goal of these activities is not to help them return to their baseline function but to help improve their quality of life. Find activities that build on the remaining skills that they have even the slightest of it. It is extremely important that you focus on their enjoyment!