Understanding the Basics of Weight Loss: The Thermic Effect of food

Nutrition
Written by: Zaakir Shakoor, MSc
Contents hide
1 What is the Thermic Effect of Food?
2 How to Increase TEF
3 Why is Caffeine Such a Great Addition to the Diet for Weight Management?
4 How To Get Your Daily Caffeine Intake?
4.1 #1 Breakfast
4.2 #2 Lunch
4.3 #3 Before Exercise
5 Take home message
6 References.
FacebookTweetPinLinkedIn

What is the Thermic Effect of Food?

TEF accounts for around 10% of your total energy expenditure (1, 2), which isn't much but can still make some difference when combined with other variables like exercise.

Some food groups have a higher energy yield than others. For example, protein and fibre contain 4kcals per gram and being the most thermogenic, it burns through an impressive 30% of its calories.

Protein is important for maintaining and growing muscle tissue and other bodily functions.

Second on the list of macronutrient groups with the highest' burning rate' is carbohydrates.

Carbohydrate contains around four calories in each gram. We need carbohydrates because let's face it,

1. they taste good and

2. they provide energy as they are stored within the muscles and liver in the form of glycogen, which is then summoned when we need to produce movement through a process called glycolysis.

Carbohydrates have TEF of 5-10%

The last and slowest macronutrient is dietary fat. Fat is important for hormonal balance containing the highest nine calories per gram, burning through 3-4% of total calories.

How to Increase TEF

Based on this logic, adopting a slightly higher protein diet would optimize body composition.

The infographic below shows a difference in macronutrients between two diets with the same caloric intake.

Diet 1 contains 50g more protein and 50g fewer carbohydrates, equating to an additional 40 calories burnt from TEF. 40 calories don't seem like much but can add up over the weeks during a weight loss phase. 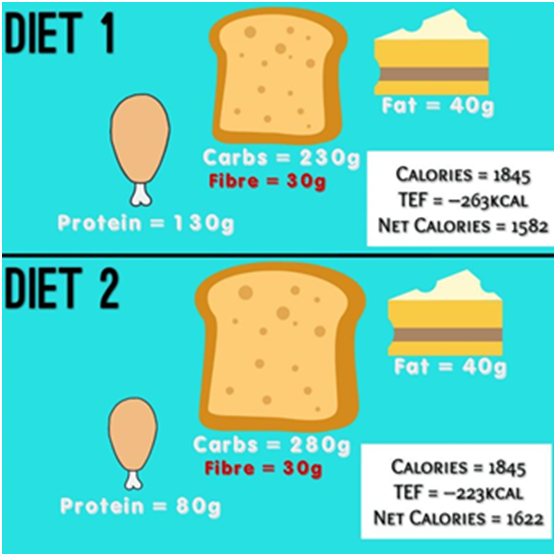 Why is Caffeine Such a Great Addition to the Diet for Weight Management?

Caffeine is a naturally-occurring substance commonly associated with coffee (3) and has frequently been added into carbonated drinks (4, 5).

Are you a morning coffee person? Most people that I have come across are because caffeine can antagonize the adenosine receptors in the brain, which are responsible for keeping us relaxed.

This reaction stimulates the central nervous system (CNS), thus promoting wakefulness and a sense of energy and elevating mood via the release of endorphins, thereby also reducing stress (6).

A bi-product of this is that a person will be more active and produce smaller movements such as walking around, tapping the feet, looking around etc., which will burn calories from the component that we have highlighted known as NEAT. If you're interested in NEAT, refer to one of our previous articles (LINK HERE).

It turns out that caffeine has its own TEF! for each 300mg of caffeine ingested, 50kcals are expended (7), which does not seem like much but accumulates over time.

When a large dose of caffeine is taken before exercise, you can burn even more calories from NEAT and EEE (Exercise Energy Expenditure).

How To Get Your Daily Caffeine Intake?

The upper daily limit in the UK and Canada is 400mg per day, and although it's not set in stone, I like to abide by this limit.

I cannot make direct individualized suggestions on how to consume your caffeine. Still, I can offer some insight on how I would help a client maximize NEAT, EEE and TEF, three very important components towards weight management.

ALWAYS consult your doctor before taking on any new interventions, and do not take anything from this article individualized.

So, using the example of an average 60kg individual could consume;

A small cup of black coffee (1 teaspoon of ground coffee beans) with breakfast (50-60mg) is a great way to start the day to boost alertness and focus at the beginning of the day.

Why diet soda? It practically has no calories and burns additional calories as it contains caffeine, not to mention it's safe to consume in moderation despite what you may have heard about those 'Evil Sweeteners'.

As a Pre-workout drink, a Large black coffee or a 500ml caffeine-based soda would work well for boosting performance and burning through extra calories (140-200mg)

The research has shown a performance modification with a large caffeine dose of 3-4mg/kg of bodyweight 1hr before exercise, subsequently burning through more calories from creating more movement (8, 9).

Your macronutrients can be alerted for you to maximize TEF. TEF only accounts for around 10% of total daily calories, but combined with all of the other variables like exercise and none exercise-related movements can make all the difference in the long run of maintaining a healthy weight.

Remember, protein and fibre have the highest bang for their buck, so you may want to prioritize protein and fibre intake for their short- and long-term benefits of weight. However, do not forget the importance of the other macronutrients known as carbohydrate and dietary fat.

Caffeine is a great addition to the diet. In my opinion, not only does it have a TEF, but also helps to burn calories through exercise and daily movements.

Please note, caffeine being an adenosine blocker, it is suggested NOT to ingest it 6-7hrs before bedtime as it could affect sleep.

FacebookTweetPinLinkedIn
Article written by Zaakir Shakoor, MSc
Zack Shakoor Kayani was born and raised in the South East of England/London. Zack has attained a bolus of knowledge regarding biosciences through academia and his career experiences. In terms of his educational background, he has a Bachelor of Science in Kinesiology (Hons.), a Postgraduate diploma in sports nutrition with the International Olympic Committee, and a Master’s of Science in Nutritional Sciences. Zack has been fortunate enough to apply his Exercise Science and Nutrition Knowledge to aid Hundreds if not Thousands of Patients and Athletes, providing 1-1 consultation, Personal training, Information sheets, offering recommendations to collate nutrition and exercise programs, etc. Not to mention, in 2020, he authored a book called ‘Obesity Decoded’